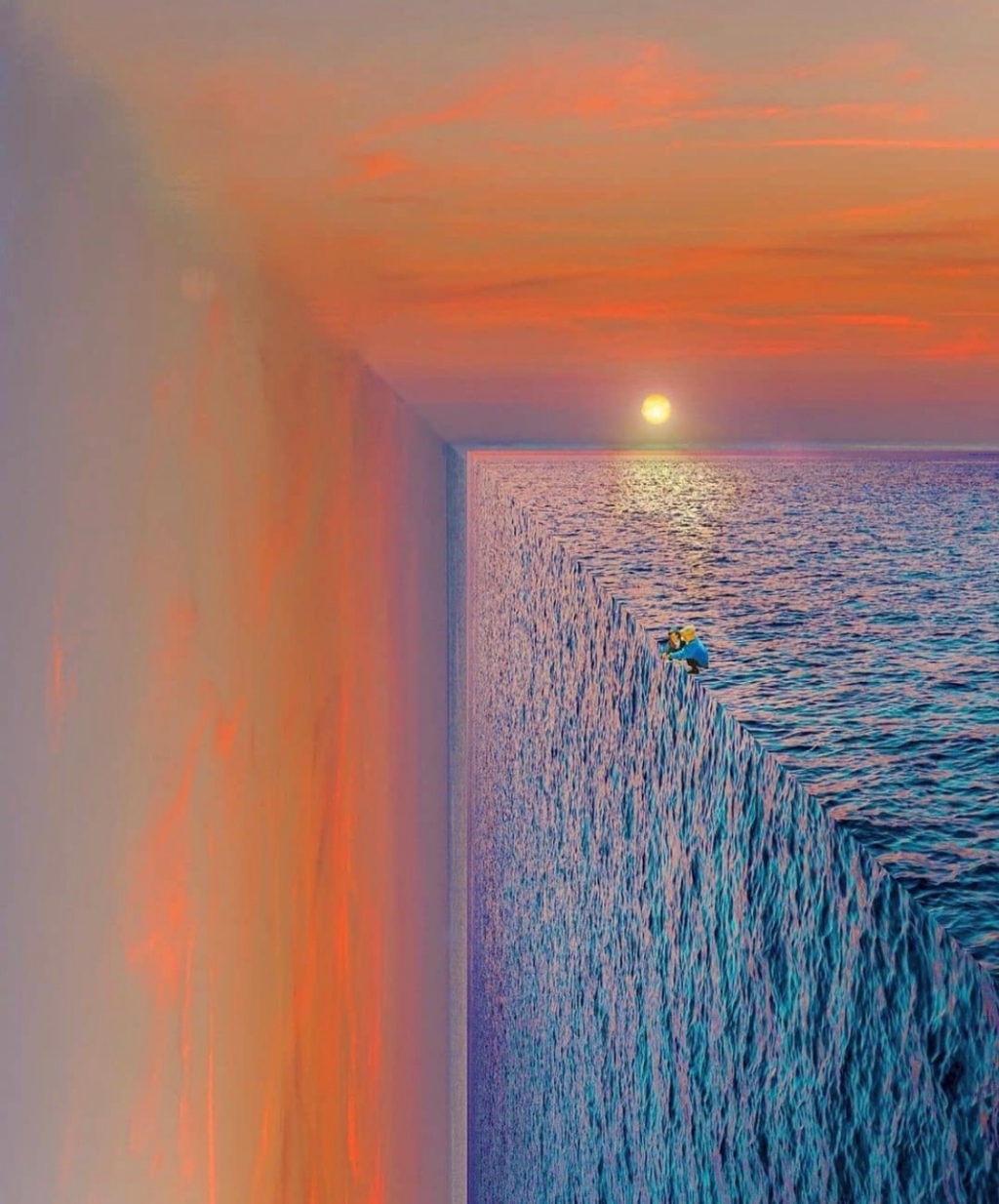 This is a sober (and sobering) new moon that asks us to take a very pragmatic and realistic look at what is meaningful and worthwhile to us now, and take action steps to head in that direction, however small they may be. The sun and moon are united at 12 degrees of the fixed Air sign, Aquarius. Aquarius is the sign most closely related to “the future” as a concept, technology, and how collectives or groups operate together. At the highest end of the vibrational spectrum, Aquarius is also about human potential and consciousness. Saturn, one of the co-rulers of Aquarius, has been in Aquarius since late 2020 and is closely conjunct this new moon at 14 degrees Aquarius.

There is a much larger story going on at the moment. A story that involves the Jupiter/Saturn conjunction at 0 degrees of Aquarius that occurred in December 2020 and which set the dominant energetic pattern for the 20 year cycle that we began at that time. And the shorter 3 year energetic of Saturn in Aquarius (of which we are more than half way through). If you are very interested in the macro astrological trends of the moment I would definitely encourage you to take a peek at the two articles hyperlinked above, as well as the article about the Saturn/Pluto conjunction of January 2020.

But the gist of things is that our culture is in midst of *deep* change (Pluto), at a collective level (Aquarius). Pluto at this time is still in Capricorn, breaking down the outmoded structures of hypocrisy, beaurocracy, misogyny, big business, and antiquated traditionalism. It has been in Capricorn since 2008, around the time of the economic crash, working its way through the business world and upending rules/traditions/expectations that had been unchallenged for far too long. Pluto is in its swan song in Capricorn (it moves into Aquarius in 2023), but it is center to the entire story of this time period as well as this new moon. The outmoded/decaying/ineffectual government and business practices (Pluto in Capricorn) must be released in order for the new to be born, in order for there to be “a future” (Aquarius) that is equitable and works for all.

That is not a reality at the present time, and the next decade will be instrumental in changing basic structures (Saturn) of collective life (Aquarius) so that we can thrive as humans. Right now there is something of a battle going on between the TWO rulers of Aquarius – Saturn and Uranus – who are not only different in temperament, but have been squaring one another for over a year (*square is the traditional aspect of tension in astrology). Uranus has been camped out in the early middle degrees of Taurus (it is currently at 10 degrees Taurus, and of course square to this new moon), and Saturn has been camped out in the early middle degrees of Aquarius (now at 14 degrees). Uranus and Saturn are strange bedfellows as the co-rulers of Aquarius but both have their purpose. The Saturnian element of Aquarian energy encourages us to work with WHAT IS (Saturn is a pragmatist), and to create meaningful change within structures (organizations, political parties, businesses) rather than merely write poetry or think about it, for example. The Uranian component of Aquarian energy is what gives it the VISION for the improvements, the best possible revisions and best possible future solutions. Together these components complement each other and make Aquarius EFFECTIVE at creating change.

But as I mentioned before, these two planets are NOT cooperating at the moment- they are squaring one another and have been since early 2021. The old structures/ norms/”authorities” (Saturn) want to keep things the same and/or create even tighter “rules” (Saturn) within the collective (Aquarius). Uranus in Taurus, on the other hand, wants to completely upend (Uranus) the status quo, and plant brand new seeds (Taurus) for the future, ideally a future that offers everyone a chance to be peaceful and prosperous and nourished (Taurus). We can see this tug-of-war playing out in many ways in the collective.

And this new moon is rather a climax. Firstly, it sets the energetic for the entire 28 day new moon cycle, so between Feb 1 and the next new moon on March 2nd, the above mentioned themes will all be playing out strongly. And with extra emphasis on financial matters for several reasons :

1. This is the first new moon since the lunar nodes changed signs and took up residence the two financial signs of Scorpio and Taurus on January 18. Karmic issues related to financial institutions/taxes/secrets/manipulation (Scorpio) and possessions/assets/resources (Taurus) are the primary collective focus between now and January 2024.

2. Uranus in Taurus (so highlighted during this new moon in square to the sun/moon/Saturn) also has been creating extreme instability and change (Uranus) in the realms of finance/the economy/natural resources (Taurus)

3. There are 4 planets in Capricorn, the sign of big business/government/patriarchy. These include Pluto (which again has been there since 2008), but also ALL THREE of the ‘personal planets’ : Mercury, Venus, and Mars. This shows us that whatever changes (Pluto) are happening in the realms of business and finances will affect us all very personally.

4. The United States Pluto return. This occurs on February 20th. For the first time since 5:10 PM on July 4, 1776 (when the Declaration of Independence was signed in Philadelphia, creating the US birth chart), Pluto is returning to the exact same position in the sky. This is because Pluto has an orbital period of nearly 250 years, so it has not ‘been back’ since then, but will be back on February 20th! Whatever fundamental issues need to be looked at in the United States in the Plutonian realms of “power” and “energy” (in all their many meanings) will come up this year in meaningful and likely very unexpected ways. Pluto is all about TRANSFORMATION, which can be a bumpy ride to say the least. (Pluto will come back to this exact spot twice more this year : on July 11 and December 28).

5. Venus is stationing. When a planet is on the single degree where it changes direction it is very strong. Days before the new moon, Venus goes direct at 11 degrees of Capricorn and is still on that same degree at the new moon. This once again highlights the two primary Venusian themes, LOVE and MONEY. We likely have seen some reversals and surprises in this area since Venus first went retrograde in Capricorn on December 19th. Venus is direct at the time of the new moon but since it is stationing it continues to highlight volatility and changes in these areas.

Other significant aspects to note are that Mercury is still retrograde and ALSO stationing at 24 degrees of Capricorn. That is because the day after the new moon Mercury goes direct, so it is virtually motionless in the sky. The “regular stream” of news/ideas/information/communication has been disrupted. We may have communication issues throughout the duration of this lunar cycle. And we may not have a sense of what news/ideas/information is ‘real’ or accurate.

Mars and Venus are also conjunct one another, at 5 and 11 degrees of Capricorn respectively. They come into EXACT conjunction TWICE in the upcoming weeks which is very rare ! They come together at 16 degrees Capricorn on February 16 (the day of the Leo full moon!), and then again on March 6 (during the Pisces New Moon cycle) at 0 degrees of Aquarius. Mars wants us to take action. And so it is pushing us to “take action” especially on Venus related matters, once again primarily concerning relationships and finances. Just remain mindful of the unpredictability of these aspects so choose wisely.

PHew ! That is a lot. But we do have some supportive celestial bodies as well. Venus and Mars are in sextile to Jupiter at 7 degrees of Pisces. Jupiter in Pisces is all about faith, courage and optimism- so when we really KNOW something (Jupiter) we can take a leap of faith. Likewise, Neptune at 21 Pisces is sextile to Mercury Rx and Pluto at 24 and 26 degrees of Capricorn respectively. Neptune is turning up our intuition and encouraging us to communicate (Mercury) and transform (Pluto) from that place of inner wisdom.

Leaning into Jupiter and Neptune in Pisces and the whispers of faith, courage, intuition and knowing that they are giving us is a very important key to getting through the next several months, especially if we are making important choices related to transformation (Pluto) in areas of money and relationships (Venus) in our lives. What is important to keep front of mind is the future we want to create (Aquarius) for ourselves as well as as a whole, and what practical adjustments (Saturn) are necessary to get there. It’s time to say yes to our dreams of what is possible (Jupiter and Neptune in Pisces) rather than staying stuck in the past. But to make these changes and choices from a place of both high consciousness and high pragmatism is the road before us now.