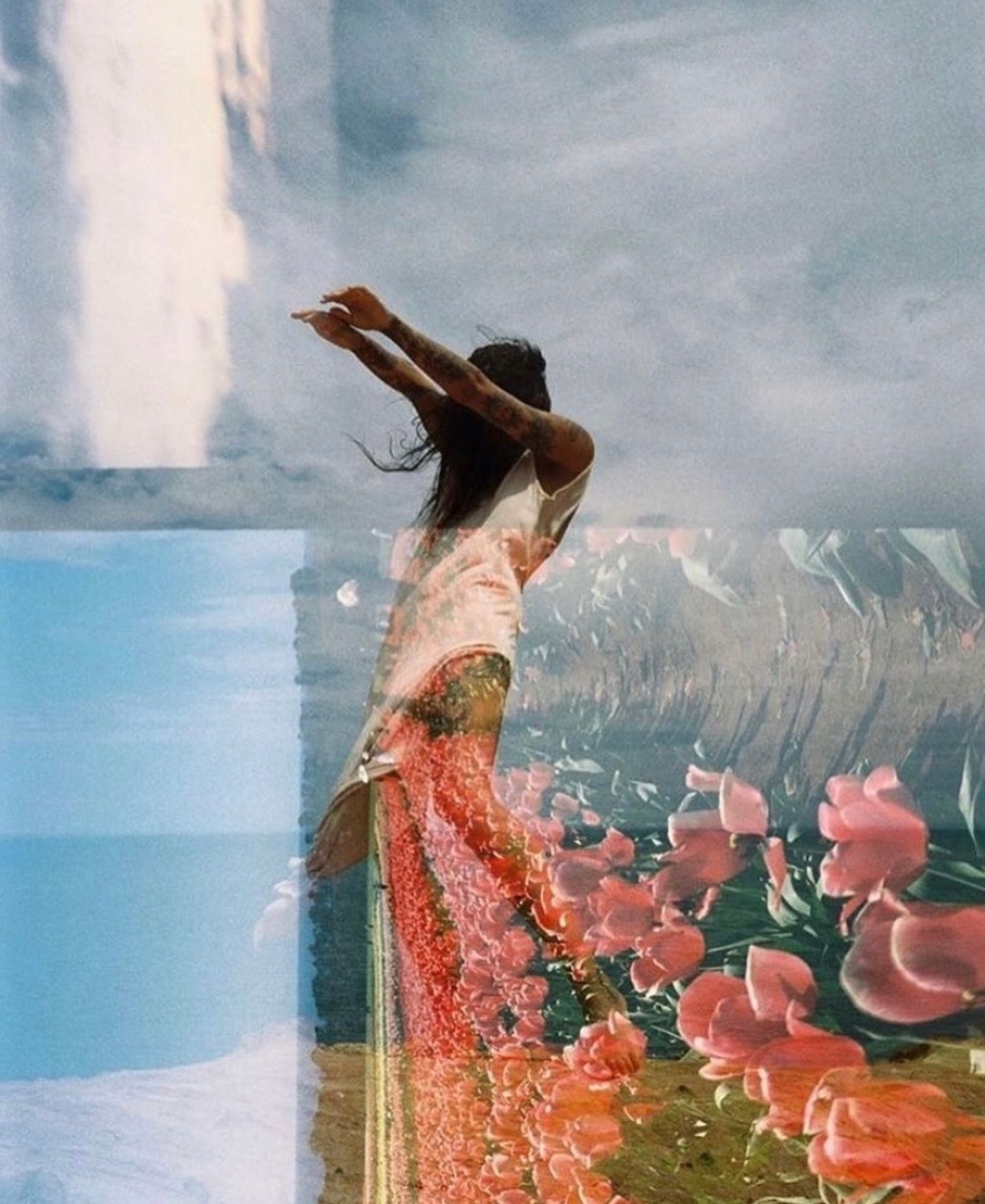 Welcome to eclipse season! This new moon solar eclipse has the potential to seriously stir things up – for better or worse (or both!). This eclipse is extraordinary and powerful for several reason.

First, it is at 10 degrees of Taurus, the fixed earth sign of the zodiac (which prefers peace and calm) BUT it is also conjunct wildcard planet of disruption Uranus at 14 degrees of that sign. So there is a deep and inherent friction between our desire for stability (Taurus) and the ongoing change and ‘up-leveling’ that is happening all around us (Uranus).

Secondly, Venus (the ruler of Taurus) is the ruler of the eclipse, and is EXACTLY conjunct the great expander Jupiter at the time of the eclipse. Both planets are at 27 degrees of mystical Pisces. This is highly significant because Venus is ‘exalted’ in Pisces (very strong and positive), and because the Jupiter Neptune conjunction which was exact on April 12 is still very much in effect.

Venus/Jupiter/Neptune together in Pisces call our attention strongly to the ‘unseen realms’ and the workings of metaphysics and consciousness in our lives. In essence, our thoughts and beliefs are reflected back to us in our experiences, and that has hardly ever been clearer, more apparent or STRONGER than it is right now. This is ALWAYS how life works, but it’s like ‘the universe’ is trying to get us to see/understand this now (so that we can become positive conscious co-creators) and so it’s as if the ‘synchronicities’ and EVIDENCE of our thoughts/beliefs are showing up in our lives more clearly than ever, so that we can connect the dots, and course correct accordingly. For the past several weeks, and next month going forward, it may have felt as though we think of a person (and then we bump into them!), we have an instinct (and it is confirmed days later!). These are important insights to keep track of so that we deepen our sense of trust in our own abilities. Then we can rightly understand these ‘synchronicities’ as motivation to help us see/understand our own magnetic power and use it deliberately and positively in our lives.

Headstrong Mars is also in Pisces, at 11 degrees, and as such is in nearly perfect sextile to the new moon at 10 degrees of Taurus. This is very encouraging, as even though Mars is weak in Pisces (it prefers to exert its muscle in more headstrong deliberate signs), its positive aspect to the new moon shows that we can (and should) easily take action on the insights and revelations that are coming to us now (but Mars in Pisces is also about subtlety, so finesse and nuance go a long way).

And there may be many insights and revelations! Uranus, so highlighted during the eclipse, is the planet of vision, the future, higher consciousness, brainstorms, and spontaneous insights. Whereas Neptune (conjunct Venus and Jupiter) is associated with deep inner KNOWING of our spiritual essence, Uranus is the lightning bolt of insight which can provoke us further down our path of growth and individuation. And that is exactly what is happening now through these disruptions to our personal and collective status quo (Taurus).

Taurus prefers the tried-and-true and does not like chaos or disruption. But this is exactly how Uranus operates, and Uranus has been camped out in Taurus since 2018 creating massive shifts for all of us, and it will remain there until 2025. But these years of 2022 and 2023 are the crux of the “Uranus in Taurus” period, because they are the years when the eclipses happen in Taurus and its opposite sign of Scorpio. The changes that have been simmering are beginning to become crystalized. This is especially true in the areas that are associated with Taurus such as finance, banking, natural resources, personal resources, values, stock markets and currency exchanges, agriculture, food, Mother Earth, the physical body, the 5* senses, and weather/’natural disasters’. We need only look to key examples such as the proliferation of crypto (Uranus) – currencies (Taurus) to see how irrevocably and inevitably ‘the new’ is disrupting and supplanting the ‘the old’, again especially in the aforementioned areas.

So the question then becomes – are we going along for the ride or are we resisting it? What occurs during this upcoming month that kicks-off with the solar eclipse will be highly demonstrative to us each, individually and collectively, about how well we are choosing to adapt to the new, or trying to remain tethered to the old. Likewise we may get glimpses through current events or other such news about ‘curveballs’ that will have major impact down the line. There could be quite a lot of ‘foreshadowing’ happening this month. And since the period of influence of a solar eclipse is roughly 6 months, we will get an idea of the themes of much of the rest of 2022.

Our best course of action is to lean into the changes at hand, and lean into the Venus/Jupiter/Neptune conjunction as a way of relying PRIMARILY on our own inner intuition and knowing about how to handle what is coming up in our lives and in the collective, rather than deferring to ‘external’ sources such as news, authority figures, etc. Again there is a divine spark in each of us (Pisces) that recognizes Truth, and has a deep inner knowing, and it is this part of us that can and will guide us in the right direction no matter what comes up. And indeed, that voice is VERY strong now, not just because of the Venus/Jupiter/Neptune conjunction but also because Mercury, the planet of communication is highly exalted as well- at 0 degrees of its home sign Gemini.

Mercury at 0 degrees of Gemini is like a “straight shot” of information. It’s like a swift blow. But also to be considered here is the fact that Mercury begins one of its thrice annual retrogrades in the middle of eclipse season. Mercury goes retrograde on May 10th at 4 degrees of Gemini and between May 21 and 23 will retrograde back over 0 degrees Gemini. That means that whatever “truth bombs” or “news” comes up (takes us by surprise) around the time of the eclipse, may be revised or updated around May 21-23. For example, a sibling could announce around the eclipse that they are moving to Antartica (!). Big surprise. By May 21-23, they announce they are still moving but just to the next state over : Revision. Still a surprise, perhaps, but not exactly what we had originally ‘been told’. Mercury crosses over 0 degrees of Gemini one final time going direct between June 13-14. So whatever shock waves come up around the eclipse, we have a much better sense of what is ‘actually’ happening and how to respond accordingly by mid-June.

For this reason, amongst others, it’s wise during this eclipse season to be a great OBSERVER of what is happening rather than necessarily a CATALYZER of change or drama. If there has been something important simmering and we are required (feel deeply internally prompted) to take action, then this is indeed our time to act. If, however, we remain in a kind of ‘holding pattern’ about certain aspects of our life, as many of us do, it can be wise now to observe WHO is showing up, HOW they are showing up, and WHAT inner feelings this prompts in us. That is what ultimately should guide our decisions, not “a push” towards making waves or striving. Enough will be coming up during this month for us to stew over. So while I am not advocating ‘taking a back seat’ in our own lives, I am suggesting that heightened observational skills will serve us well. Especially in the realm of all things finance and relationships oriented (Venus).

Finally, another dramatic and powerful aspect is occurring practically simultaneously to the eclipse, which is that Pluto at 28 degrees of Capricorn, goes retrograde on April 29th. Again, this indicates DEEP change, at a profound internal and psychological level in additional to whatever kind of external shifts we are witnessing. We can ‘make the most’ of this Plutonian transformation by clearly observing what we are hearing/learning (Mercury in Gemini) and following the voice of our inner knowing (Mars/Venus/Neptune/Jupiter in Pisces) regardless of what kind of disruptions are occurring (Uranus conjunct the eclipse). When we do that we strengthen our internal source of True Power (Pluto) by trusting ourselves, relying on our inner knowing and taking action from that place. Since Taurus heightens our ability to physically connect with our senses we are very well positioned now ‘get the message’. Then we can move in the highest possible flow with change, rather than in resistance to it!